A bit over a year ago Sitecore released version 10.0. Amongst a long list of updates, the largest one which caught my eye was the addition of SCS (Sitecore Content Serialization) which was released as an alternate option to TDS or Unicorn. This caught my eye mainly because I hoped it would offer a better, easier solution to serialization and codegen out of the box. After implementing a solution based off this technology in the months directly after the release and maintaining the solution for over a year, lets take a look back at what we implemented and how it stacks up. * This information is all from Sitecore 10.0. Updates may have come out in the time since then, and I will happily correct anything if notified.

The key information to take away here is that this feature is free only if you use the CLI exclusively. While Sitecore claims the CLI has feature parity with SVS, and that might be technically true, I found it much harder to be granular and direct with updates using only the CLI. More on that later.

I’ll be brief with the basics throughout this post. For in-depth information on setup and anything basic, I will direct you to Sitecore’s own documentation

That being said, the golden rule of setup with SCS is that each item must only be serialized in a single location. This is very important because whereas in TDS you can include TDS projects in plop templates to blindly include items, knowing it will include all parent items every time, SCS will scream if the parent items don’t already exist, or if they get serialized more than once. As a result, we had to be more careful when setting up the module.json files.

My solution was to have a “layer.common” module.json for each layer which would make sure the project specific folders were present and created a single time, then include “layer.feature” module.json files in each helix project. Hopefully this image helps clarify what folders come out of the box, what I include in the common modules, and what is included in each feature module. 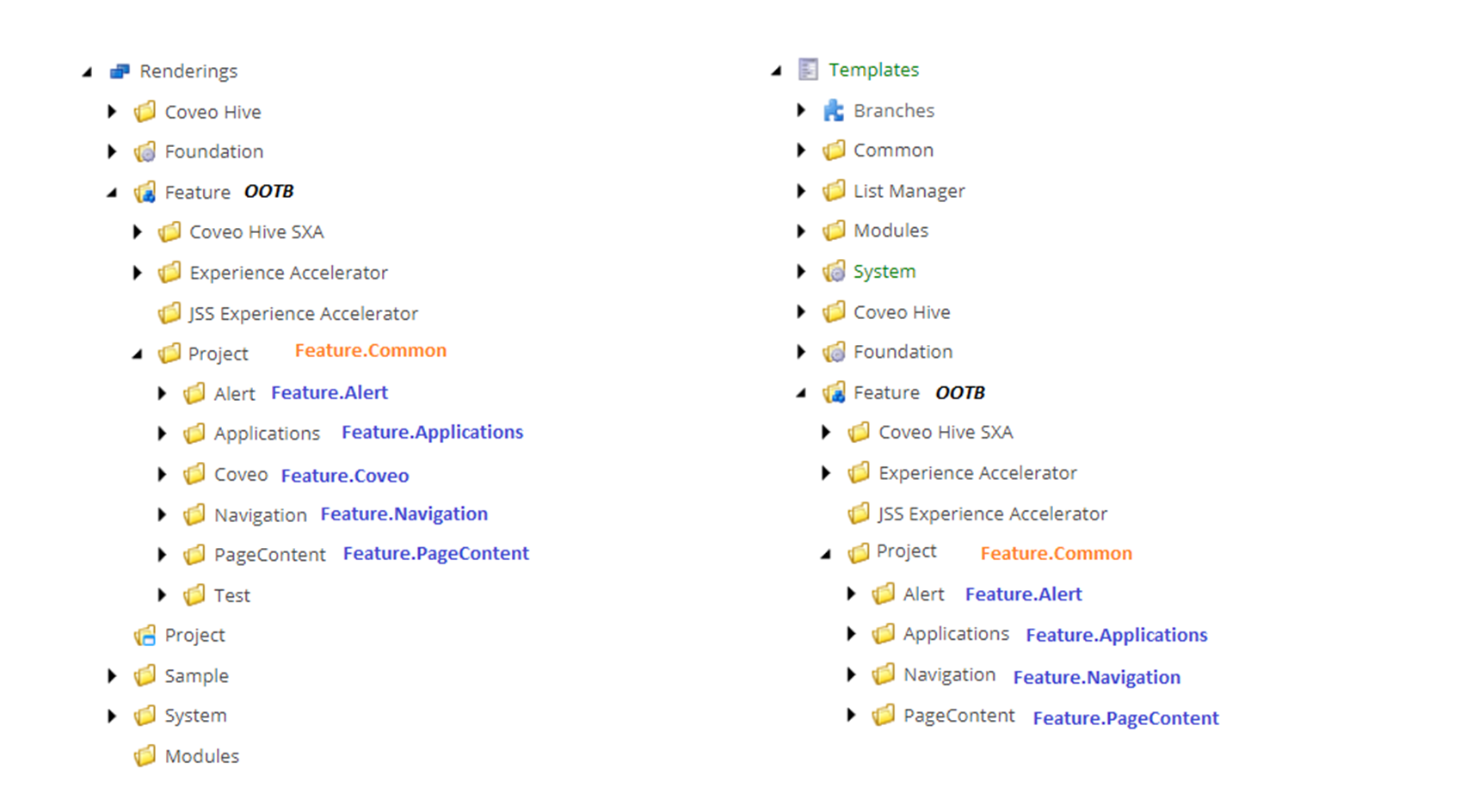 Once I worked out that basic rule, I simply added the generic module.json to our plop templates and never thought about setup or configuration again.

In summary I would say it’s definitely more difficult to setup than TDS (which doesn’t really need anything), but much easier than my memory of Unicorn.

I found SCS to be ok to use. The CLI gets messy in larger teams due to the inability to sync single items (as far as I know). This results in entire modules getting synced and opens the door for accidental overwrites. Can this be avoided if you’re careful? Yes. Is everyone always careful? No.

I also found the GUI to be not as user friendly when compared with the TDS GUI, mainly because you must choose either the ‘push’ window or the ‘pull’ window. I can’t go through each item and select which direction to push updates in a single window, I need to push all updates first, then pull all updates afterwards. This is definitely a minor annoyance, but an annoyance nonetheless.

The original decision to use SCS came from a place of curiosity and was rather quick, however that decision was put to the test a few days later. While I have switched from using Glass Mapper to greatly preferring an “ORM-less” approach, we still have a heavy reliance on code generation. The Sitecore API’s are terrific and easy to use, but can quickly become messy without it, and SCS does not support code generation. Yet (hopefully). In the meantime, we couldn’t wait, so we implemented a different solution. I also believe Leprechaun now supports SCS for code gen, which may be a better approach, although still increasing your dependencies on other software.

Luckily I had a reference point of another blog post, I believe this one, to point me in the right direction. What I ended up doing:

The result was perfect code generation! The barebones .tt file was included in plop templates and successfully generated my desired constants for every feature. Maybe not perfect, we did need to run the custom tool manually after every serialization update, but that is a minor issue.

Again glossing over the basics, I found deployments to be very easy. By avoiding the mystery of dropping TDS packages in file systems and replacing that process with a simple CLI command to install packages, I found the process to be much faster in addition to being much easier to track. In my case, I also split my serialization into two separate packages - “data” and “content”. The difference was a single module.json for Project.Content which included test content, so that I could deploy all necessary items with content to a development environment, and omit all the test content for higher environments. With the CLI, this was very easy.

During this implementation I did find a few issues:

At the end of the day, I really enjoyed using SCS. My biggest pain points were the lack of built-in code generation and the GUI feeling lackluster in comparison to the TDS GUI, but they were minor enough. The improvements in speed and simplicity paid off in the long run. While it did take longer to setup than TDS, once setup was finished I never had to touch it again, whereas I always find myself fiddling with update options in TDS. I’ll definitely be looking forward to SCS updated from Sitecore.